How Obama Traded Away His Legacy 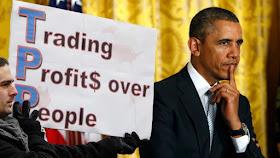 I'm about to say the obvious, but with so many dots getting connected in this post-election, pre-Trump interregnum, I want to connect just these two and let the obvious sink in.

Obama's push for TPP not only cost Clinton the election (among other factors, of course), it very likely cost Obama his legacy — all of it.

Barack Obama has a number of what his supporters call "legacy achievements" — meant positively (I would add a number of inverse-legacy achievements as well) — but chief among them, first in the list, is always the ACA, "Obamacare." Whatever its demerits, and they are many, it did accomplish a narrow task — providing medical insurance, in some form, to millions of Americans who didn't have it before.

That legacy achievement is about to be stripped away, all because Donald Trump, with a fully Republican Congress behind him, has been elected president.

And what caused that Republican takeover of the White House? Again, many factors, but chief among them, in my estimation and in the estimation of a number of writers, is Obama's relentless push to pass TPP even as Democratic candidate Hillary Clinton was running to inhabit, in effect, Obama's third term — and even as both Donald Trump and Bernie Sanders achieved or nearly achieved unpredicted upsets running against "free" trade economics.

Let that sink in, because it's not going to be said in too many public Democratic places. Obama's relentless push to pass TPP in part cost Clinton the election and in full will cost Obama his signature ("legacy") accomplishment.

Again, you won't hear many Democrats say this, because the "free" trade wing of the Democratic Party is still in charge (of the Party, not the country). And that wing, which includes almost all Clinton supporters in the Party — including Tim Kaine, her choice for vice-president, and including Tom Perez, Obama's "not Keith Ellison" choice for DNC chair — is still in favor of job-killing trade deals. This intra-party dynamic, I predict, will keep them out of power for a generation, unless the Obama-Clinton wing is ousted from party leadership in something like the next six months. That's possible, of course, but it doesn't seem likely to happen.

(And before you say, or hear, that Perez was forced to support TPP because, as Secretary of Labor, his boss supported it, consider that Perez didn't feel as compelled to support his boss's position on the recent UN condemnation of Israeli settlements.)

Supporting my contention is this, written by Lori Wallach, head of Global Trade Watch at Public Citizen, and Murshed Zaheed, political director of CREDO Action. The whole piece is worth a read; they nail it.


TPP: How Obama Traded Away His Legacy

Donald Trump is preparing to wipe President Barack Obama's legacy from existence. The Affordable Care Act, Dodd-Frank and protections for the environment and immigrants all are set to disappear in no part small part thanks to President Obama himself and his relentless advocacy for the Trans-Pacific Partnership (TPP) right through Election Day.

And President Obama still won't face the sorry truth, this week declaring that he would have beaten Trump if he had been the candidate. After years of siding with corporate America to pass various job-killing trade deals over the opposition of congressional Democrats, he announced that it was "nonsense" that anyone should have the view that "Democrats have somehow abandoned the white working class."

Yet in fact, post-election polling and exit polls confirm that Trump flipped decisive states because he connected with voters' fury about job-killing trade deals.

Trump won Wisconsin, Michigan and Pennsylvania by 23,000, 11,000 and 68,000 votes, respectively. The number of people in those states certified as having lost jobs to trade since the North American Free Trade Agreement, or NAFTA, is 78,331, 159,252 and 182,017 under just one government program that captures a fraction of trade-related job loss.

Notice the mention of NAFTA above. People have long memories when it comes to NAFTA, especially people out of work. NAFTA is almost iconic for "Democrat-sponsored job-killing trade deal."

About my comment that Clinton was running for "Obama's third term":


Meanwhile, President Obama's closing argument for Clinton at a Michigan rally the day before the election was to "continue this journey of progress," effectively promising a third term of an Obama presidency that had spent the past two years prioritizing the implementation of a trade deal despised not only by working class Midwesterners, but the entire Democratic Party base.

My own thought about the election, one of them anyway, is this: Voters didn't just vote for "change" in some vague dissatisfied way. Many voters specifically repudiated "Clintonism" — Democratic Party-sponsored neoliberalism — when they voted last November. Evidence for that is this — Clinton's very high unpopularity, which cannot simply be chalked up to 90s-era right-wing smears. Too many younger voters, for whom the 90s occurred in the time of Alexander the Great (or at least Ronald Reagan), repudiated her candidacy as well, especially during the primary.

Why Did Obama Risk His Legacy for TPP?

To answer that, one must connect different dots. Here's two of them, via the New York Times:

...The dinner in the private upstairs dining room of the White House went so late that Reid Hoffman, the LinkedIn billionaire, finally suggested around midnight that President Obama might like to go to bed.

“Feel free to kick us out,” Mr. Hoffman recalled telling the president.

But Mr. Obama was just getting started. “I’ll kick you out when it’s time,” he replied. He then lingered with his wife, Michelle, and their 13 guests — among them the novelist Toni Morrison, the hedge fund manager Marc Lasry and the Silicon Valley venture capitalist John Doerr — well past 2 a.m.

Mr. Obama “seemed incredibly relaxed,” said another guest, the writer Malcolm Gladwell. He recalled how the group, which also included the actress Eva Longoria and Vinod Khosla, a founder of Sun Microsystems, tossed out ideas about what Mr. Obama should do after he leaves the White House.

Publicly, Mr. Obama betrays little urgency about his future. Privately, he is preparing for his postpresidency with the same fierce discipline and fund-raising ambition that characterized the 2008 campaign that got him to the White House.

The long-running dinner this past February is part of a methodical effort taking place inside and outside the White House as the president, first lady and a cadre of top aides map out a postpresidential infrastructure and endowment they estimate could cost as much as $1 billion. The president’s aides did not ask any of the guests for library contributions after the dinner, but a number of those at the table could be donors in the future.

The $1 billion — double what George W. Bush raised for his library and its various programs — would be used for what one adviser called a “digital-first” presidential library loaded with modern technologies, and to establish a foundation with a worldwide reach. ...

...Including construction costs, Mr. Obama’s associates set a goal of raising at least $800 million — enough money, they say, to avoid never-ending fund-raising. One top adviser said that $800 million was a floor rather than a ceiling.

There are many more high-dollar names in the article, including these:


So far, Mr. Obama has raised just over $5.4 million from 12 donors, with gifts ranging from $100,000 to $1 million. Michael J. Sacks, a Chicago businessman, gave $666,666. Fred Eychaner, the founder of Chicago-based Newsweb Corp., which owns community newspapers and radio stations, donated $1 million. Mark T. Gallogly, a private equity executive, and James H. Simons, a technology entrepreneur, each contributed $340,000 to a foundation set up to oversee development of the library.

As a one-time mayor of Chicago, Hizzoner himself, used to say, "Youth wants to know." And so do the rest of us, though the answer seems fairly (as I said in this essay's first sentence) obvious. Hillary Clinton is off to a post-electoral retirement in semi-disgrace; the Democratic Party seems doomed to wander the wilderness for a good long time; and Obama ... he sails into a well-financed, almost golden, future sunset.