Clinton Will Build Her Biggest Lead on March 15. Sanders Will Erode It After That. 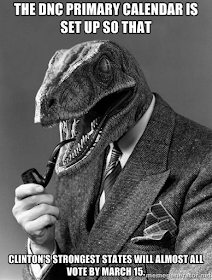 I'm keeping this short to put a very simple idea into your head. Because of the way the Democratic Party voting calendar is structured this year, Clinton's largest lead will occur on March 15. After that, most of Sanders' strongest states will vote.

What this means is simple:
March 15 is the Ides of March; a good way to remember the date. The message — gear up for a battle after the Ides of March, and don't let the establishment media tell you what to think. They won't be right until the last state has voted.

If you want to stop reading here, this is all you need to know.

Now the data. One of the best data-stitians I've come across is a diarist at Daily Kos named MattTX. Matt is very good, professionally good, at this stuff. In a long, carefully-reasoned diary, "How Bernie Sanders can win the Democratic nomination," he lays out six scenarios for the race, in five of which Bernie Sanders wins the nomination (the other is a current baseline with no momentum). He presents them in a parallel fashion, and each presentation differs only in changing a small set of assumptions. Once you understand how to read the first one, you can read the others easily.

The first three scenarios are "static" — they assume that the national polling remains fixed throughout the race. He then runs the numbers on each state race for the following assumptions:
Then he looks at what "momentum" looks like in a number of recent presidential contests (it actually can take a number of shapes) and chooses a momentum pattern associated with Obama's win over Clinton in 2008. (Click here to see that chart.)

His final three scenarios are "dynamic" variations of his static ones, with shifting momentum off the current baseline. In each of these, Sanders wins, each time overcoming the bulge in the Clinton lead that comes on March 15. In the narrowest of these winning scenarios, the March 15 bulge is quite large, +184 delegates for Clinton.

Note that the data in Matt's piece was run prior to South Carolina's results, so Sanders has some additional ground to make up. Still, Sanders is right to "take it to the convention." Most of his strength comes after most of Clinton's, and Sanders could easily surprise in his states, just as Clinton will surprise in some of hers. Again, we won't know who has the lead for good until after California and four additional states vote in early June.

Bottom line — What looks bad for Sanders supporters on March 1 will look worse a few weeks later. But stay heartened. Whatever the result through March, this isn't over until June, after Sanders' best states have voted as well.

(Blue America has endorsed Bernie Sanders for president. If you'd like to help out, go here; you can adjust the split any way you like at the link. If you'd like to "phone-bank for Bernie," go here. You can volunteer in other ways by going here. And thanks!)