Chamber of Commerce Expects Clinton To Support TPP as President

Chamber of Commerce chief Tom Donohue explaining to viewers on the Bloomberg wealth channel how the wealthy plan to pass TPP despite public opposition (source). That's the beautiful snow of a Davos resort in the background.

This is the essence of money talking about money at a place where money's private jets have gathered to meet (the World Economic Forum at Davos, Switzerland). From the Bloomberg News introduction:


U.S. Chamber of Commerce President and CEO Thomas Donohue discusses his stance and outlook for the Trans-Pacific Partnership deal. He speaks from the World Economic Forum in Davos, Switzerland on "Bloomberg ‹GO›."

In the conversation above, note first that the reason he thinks the Senate can't approve TPP until after the election is that too many Republican senators would be made vulnerable by voting to approve it. Before the election those senators couldn't vote for TPP and still preserve their seats. After the election, or in a lame duck session, that restriction is lifted.

In other words, he knows and admits that even Republican voters hate TPP. But the wealthy want it anyway, and they're willing to wait a few months to get it. Even if it wins by "two votes," as he explains above, it still wins, as do they.

Second, he thinks Clinton will revert back to the family pattern — remember, "two for the price of one" was a Clinton claim — and become "practical" once she gains power and frees herself from having to make promises to voters. Listen starting at 2:45 in the clip (my transcript and underscored emphasis):


Host 1: "Why aren't you in some trouble whether it's a Democrat or a Republican? It's not just Trump. Hillary Clinton has said she's against TPP.

Donohue: "Bernie Sanders is one deal. What Hillary Clinton is doing in this primary is trying to run one step faster than the senator from Massachusetts [does he mean Warren, or is this a misspeak?], who has been threatening her and pushing her to take these far far progressive, very very left steps.

"If she were to get nominated, if she were to be elected, I have a hunch that what runs in the family is, you get a little practical if you ever get the job."

Host 1: "We used to call it triangulation, right, back in the old Clinton days."

For me, the key word is "hunch." Because until Clinton releases the text of her speeches to all corporate clients, and not just to the banks, you'll never know if his "hunch" didn't start with someone whispering in his ear, "Don't worry, Tom. You know I don't mean it." After all, the list of Clinton ties to money goes on and on. For an excellent recent analysis of the cross-pollination of gifts and favors, read this, "The Clinton System," from the New York Review of Books.

Donohue is not no one — he and the U.S. Chamber of Commerce are each a very big someone in the world of money, a world that both Clintons have a united and decades-long familiarity with. Just a very small taste of what's in the NYRB article, this paragraph (my emphasis):


In March 2011, for example, Bill Clinton was paid $175,000 by the Kuwait America Foundation to be the guest of honor and keynote speaker at its annual Washington gala. Among the sponsors were Boeing and the government of Kuwait, through its Washington embassy. Shortly before, the State Department, under Hillary Clinton, had authorized a $693 million deal to provide Kuwait with Boeing’s Globemaster military transport aircraft. As secretary of state, Hillary Clinton had the statutory duty to rule on whether proposed arms deals with foreign governments were in the US’s national interest.

That's both damning, especially in a world without tribal loyalties, and par for the course. A $175,000 "thank you" to one of the Clintons after the other removed the last hurdle to a nearly $700 million deal involving the same two parties — that's some "system." There are countless examples of this in the NYRB article. Coincidence? You decide.

(Notice again, by the way, that the ROI on this kind of exchange is through-the-roof good for the beneficiaries, more than 1000:1. One percent of $700 million is $7 million. At just 1000:1 RIO, the "thank you" would have been at least $700k. Clinton got just a quarter of that. Seems like a steal to me, but (a) I don't work for those kind of numbers, so I don't know that world, and (b) maybe Boeing and Kuwait had other ways to say thank-you as well.)

I think Donohue above is dropping one of many "nudge-nudge" hints to the wealthy, a hint that once they get rid of Sanders (they being the insider establishment that runs this mutually beneficial game), everything will continue as before. I think Donohue knows exactly what's going to happen if or when Clinton is elected president. It's not that she wouldn't do things like approve this Boeing/Kuwait deal if her family weren't paid for it. It's that she's happy to do these deals knowing the reward is built into the game. Like Donald Trump donating to her campaign, then having the right to get her to attend his wedding. It's just part of the way the rich self-deal.

My suggestion: If you want to avoid another 2009 neoliberal hangover from money-bought policies you didn't vote for ... if you fear watching the next Democratic president sell you out and enact policies you will spent the next eight years hating ... the time to act is now, in the primary.

I strongly believe we won't get another chance like this in our lifetime. In 2024 we'll be in an entirely remade world.

Speaking of people who know something... 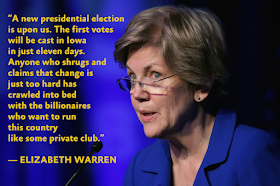 Ms. Warren in the quote above — she maybe knows something too.

(Blue America has endorsed Bernie Sanders for president. If you'd like to help out, go here; you can adjust the split any way you like at the link. If you'd like to "phone-bank for Bernie," go here. You can volunteer in other ways by going here. And thanks!)